It was a very strange Halloween this year. Sandy wreaked havoc across the region and many left without basic necessities like power, food, and gas. We were left without power for 6 days (this draft was originally written on day 5, and then was subsequently eaten by OneNote, but that’s another story). With Halloween falling on the second day without power, many communities decides to cancel Trick or Treating. But not in our neighborhood. The children started around 3pm, while there was still daylight, and spent only an hour or two before the darkness fell.

A couple of months ago, our 4 year old decided that he wanted to be a robot for Halloween. So this meant that it was my turn to make the costume. And of course, a simple cardboard box wouldn’t do. We needed a cardboard box with bling.

I got a lot of inspiration for the costume from Adafruit Forum poster jerrya (he did a phenomenal job). But I wasn’t nearly as ambitious and just wanted some simple blinky blinky. I knew right away that we needed to dust off the Netduino for this project. Yeah, this could have been done with a 555 or an ATTiny, but I wanted something large and in charge sitting prominently smack in the front of the costume saying, “Step back bitches, this here is fo realz.” After digging around on the Adafruit and SparkFun sites, and considering the amount of time I actually had for the build, I landed on the following BOM:

The plan was to have the Netduino randomly blink 3 LEDs rapidly, sweep the analog panel meter to random values on a random interval, and use a sort of Cylon/Knightrider pattern for the light strip.

The wiring was quite straightforward as seen the schematic below: 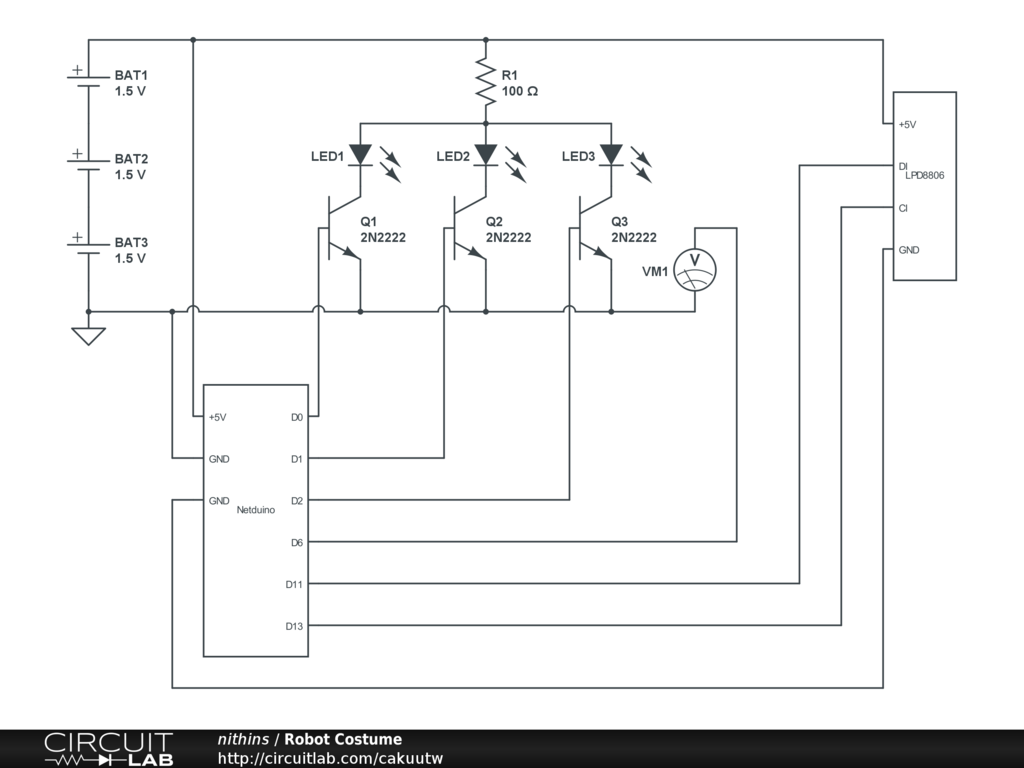 The main challenge I had was power. The current restrictions of the Netduino meant that the LEDs would have to be switched on rather than powered from the Netduino itself. In addition, the LPD8806 RGB light strip required more than 4v and strictly less than 6V. After posting on the Adafruit and Netduino forums, it became clear that I simply needed 3 AA alkaline batteries. This gave me 4.5V which met all of the criteria to drive what I needed. I filled the battery holder with 3 AAs and shoved a wire between the leads of the 4th battery slot to short the connection. Voila.

Let me also note that the Adafruit Protoshield came in incredibly handy. This eliminated the need for soldering, meaning that I could reuse virtually everything in this project. I didn’t mention this stuff was stuck to a cardboard box, right? This ain’t gonna last forever. The added bonus of the Protoshield was that all of the wiring was completely exposed adding to the coolness factor. And it leant itself to some quick debugging and repairs on the fly (and yes, it needed some minor repairs while trick or treating).

My son helped out by gluing a few knobs, scrap boards, gears, and switches in various places on the costume and helmet. We could have done a lot more with extra wires, marking, etc, but I had to compete with a 4 year old’s short attention span.

In all, the costume came out pretty good. But most of all, my son was really happy and excited. And it melted my heart to hear him respond to complements with, “Thanks! My Daddy made it for me.” He was instantly the cool kid on the block.

It was great to see the neighborhood kids have a little fun during the tough time without power. Even though a small percentage of houses actually gave out candy, the kids were able to maintain some semblance of normalcy. And it was nice to see my son shine a little light in the darkness.

This entry was posted in Netduino, Projects and tagged netduino. Bookmark the permalink.